The Tennessee Health Care Hall of Fame inducted its six member, 2016 class at a luncheon and ceremony in Belmont’s Curb Event Center on Monday, October 10. Hosted by President and Chief Executive Officer of the Network for Excellence in Health Innovation Susan Dentzer, the Hall of Fame seeks to recognize and honor the pioneers and current leaders who have formed Tennessee’s health and health care community and encourage future generations of health care professionals.

Created by Belmont University and Belmont’s McWhorter Society with the support of the Nashville Health Care Council, a Founding Partner, the event honored the Hall of Fame’s inductees including:

Jack O. Bovender, Jr.: Retired Chairman and CEO of Hospital Corporation of America, Member of the National Health Care Hall of Fame, Credited with the rescue of patients in an HCA hospital during Hurricane Katrina

Stanley Cohen, Ph.D.: Recipient of the Nobel Prize in Physiology or Medicine, Faculty Member at Washington University and Professor of Biochemistry at Vanderbilt, Completed research on epidermal growth factors that contributed to discoveries for individual cancer and immune system dysfunction therapies

Paul E. Stanton, Jr., M.D.: President Emeritus and Professor Emeritus of Surgery of East Tennessee State University, Served as a member of the Governor’s TennCare Roundtable, Assisted in conducting the first review and recommendation of changes to Tennessee’s Medicaid program 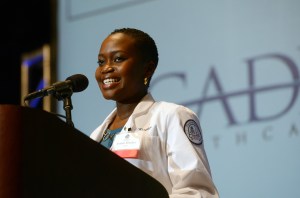 In addition to recognizing the state’s greatest health care legends, the Hall of Fame also exists to raise funds for students interested in pursuing careers in health care. Evelyn Kisakye, a pharmacy student at Belmont and recipient of a McWhorter Society scholarship addressed the crowd. Growing up in Uganda and working alongside her mother, an AIDS nurse, Kisakye said she knew from an early age she was interested in working with overlooked populations. “As a future pharmacist, I want to increase health care access to underserved populations, address healthcare disparities and social determinants in the communities and bridge the gap between developing and developed cities and countries,” she said. “Through this experience, I hope to make difference in the community and walk across this stage again as a Tennessee Health Care Hall of Fame.”

The induction ceremony featured acceptance speeches from a number of inductees, both in person or by video.